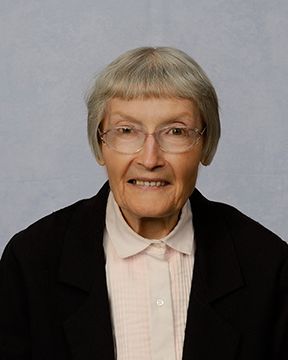 Sister Elizabeth Novy's vocation story was summed up beautifully in an article written by LeAnn Eckroth for the Bismarck Diocese "Dakota Catholic Action."

From a simple farm girl to co-founder to one of the most influential monasteries in the country, Sister Elizabeth Novy, a Benedictine Sister of Annunciation Monastery, played a part in the order’s legacy. But, for her, it happened one classroom at a time.

On Aug. 3, the charter member of the Annunciation Monastery celebrated her 101st birthday. Her name is recognized at the new Founder’s Hall at the University of Mary campus.
Still sharp-witted and articulate, the educator of 66 years downplays her role. Novy describes herself primarily as an educator.

As far back as she can remember, Novy wanted to teach. That drive was seeded as one of nine children growing up 17 miles northwest of the small central North Dakota town of Wing. At age 5, she tagged along to take first grade classes at the rural one-room school. She refused to be left behind by her older siblings and liked her teacher.

Her spiritual calling came later, although she relished stories her mom read out loud from a Catholic newspaper, written in the Czech language. “It had some sections on saints and Jesus,” recalled Novy. “I just sort of fell in love with the saints and wanted to be like one of those.”

“I didn’t know much about sisters until I went to high school,” she said. Her parents desired to board Novy with a family in Wing, so she could attend high school there, but found no homes available.

Upon the urging of a local pastor, the family chose to send Novy to St. Mary’s High School in Bismarck instead, which was then a boarding school. She lived with 15 other girls from rural areas. “My parents knew I wanted to be a teacher. They did everything they could to get me an education.”

Answering the call to her vocation

After graduating from St. Mary’s in 1933, Novy asked her mother about studying at St. Benedict’s in St. Joseph, Minn. “I didn’t say to be a sister, but she figured it out. She said, ‘You’d better not say anything to dad. He wouldn’t like it.’”

In the meantime, Novy obtained a teaching certificate from Dickinson State College to teach at country schools.

She landed her first teaching assignment 10 miles from her own farm home. “I had to board with a family and share a room with the daughter… She was my age.”

She earned $45 to $50 per month, common for rural schools in the Great Depression era.

For three more years, she taught at her former rural school, but her desire to become a Benedictine sister didn’t wane. Novy exchanged letters with a sister from St. Mary’s who encouraged her vocation and to challenge herself as a teacher. “The sisters at St Mary’s were all from St. Benedict’s. That’s why I wanted to join,” she said.

Novy mustered up the courage to ask her father during the August threshing. “Do you think you could take me to Bismarck one of these days? I want to take a bus to St. Benedict’s to become a sister.”

He happily agreed. “He said, ‘I think that’s the best thing in the world you could do.’”
At St. Benedict’s, she served as a postulant for six months while doing college work. After making first vows, as a novice, she was sent to Dickinson to teach.

While Novy grew in faith and honed her teaching skills, Bismarck Diocese’s Bishop Vincent Ryan hatched a plan to start a monastery in Bismarck to foster the presence of the Benedictine order and so local women wouldn’t have to go all the way to Minnesota to become a sister.

“Before that, most of the sisters were coming from St Benedict’s in St. Joseph, Minn. to teach or work at the hospital (St. Alexius),” said Annunciation Monastery Prioress Sister Nicole Kunze.

The Benedictine sisters had put down roots in western North Dakota medical facilities and schools since the late 19th century, but most came from Minnesota.

Bishop Ryan sought feedback from the sisters first. Bishop Ryan interviewed each separately and the sisters could not consult one another on the decision.

He asked Novy where her home was. “I said here in North Dakota. He said ‘no problem. You belong to North Dakota.’”

In 1944, just as Novy was making her final vows, the sisters signed on to found the monastery. The Vatican approved it in March 1947.

Focusing on her teaching career

From 1947 to the mid 1950s, the monastery’s first mother house for the community was located at the C.B. Little house on north Washington Street in Bismarck, the present-day diocese offices. Novy stayed in Dickinson as each school/church had its own convent.

In the late 1950s, the Charles and Eunice Swenson family gifted the land for the Annunciation Priory original site and the University of Mary and later its existing location.

Novy taught in Dickinson for nine years and then Mott for five years and several decades in Bismarck in Catholic schools. She helped students coordinate a fundraiser for those in need and the God’s Child Project in Guatemala at Cathedral School in Bismarck. The program also doubled as an opportunity to teach her young charges how to apply real life math skills in making change.

Teaching had its bright spots for the life-long teacher. “I was always happy if they could read well by Christmas,” she said of her younger pupils. Her background in smaller rural classrooms proved useful as Novy often found herself assigned to overflow classrooms. She found it best to divide the class into smaller groups. While she taught one lesson, the other group could study something else.

When school closed for the year, the sisters fanned out to rural sites in the diocese for catechism classes in the summer where no Catholic schools existed. This helped many a youth prepare for First Communion. “A lot of people out in the prairies never saw a sister until summertime,” she said. For two weeks at a time, they schooled the children on faith classes they lacked the rest of the year.

“Once they locked the doors of the classroom, we’d get into a car and go out to the farms. We’d stay with families of the parish or the rectory,” Novy said.

The sister’s influence would bear great fruit. “Several sisters credit those summer catechism classes with how they met the sisters and even inspired their own vocations,” Kunze said.

Longevity runs in Novy’s family. A sister of hers lived to be nearly 102. “Keep moving. Get off your back end… Don’t eat too many sweets,” is Novy’s advice, when asked how she’s thrived so long.

Kunze said Novy remains active with walks outside as weather allows and Scrabble every day with some of the sisters. She keeps moving as much as she can. She regularly sets the tables for the sisters for their daily meals.

Kunze said younger sisters of the faith look to Novy for inspiration as they swap stories at the table. “We’ve got a good example.”

Novy doesn’t speculate much about the impact she’s made on all those young lives in six decades, but does ponder it years later if she is at a gathering or church when among former students.

“It’s hard to take her to any church gathering where you don’t have a former first grader coming up and greeting her,” Kunze said.