Sisters Barbara Weber and Janet Zander to celebrate 50th anniversary of monastic profession on June 30, 2012 - All are welcome! 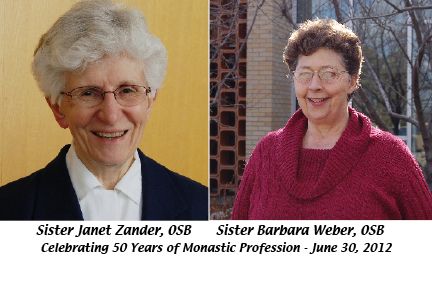 Sister Barbara Weber and Sister Janet Zander of Annunciation Monastery, Bismarck, will celebrate 50 years of monastic profession during the Eucharist on Saturday, June 30, at 1:30 p.m., Our Lady of the Annunciation Chapel at the Benedictine Center for Servant Leadership, Bismarck. The public is invited to this celebration and the reception, which will follow.

Both Sisters Barbara and Janet became postulants on December 8, 1960 and made their monastic profession on July 11, 1962. While they entered religious community at the same time, their ministries took them in different directions—each serving in a “ministry of presence.”

Sister Barbara Weber, daughter of Leo and Mary Weber, grew up on a farm northeast of Hague, N.D. She is the second oldest of four sisters and four brothers.

She graduated from St. Mary’s High School, Bismarck, in 1961. In 1977, with a degree in social work from Mary College (now the University of Mary), she began work as a social worker at St. Alexius Hospital (now St. Alexius Medical Center). In 2005, with a change in ministries, she continued her work at St. Alexius as a pastoral assistant on the telemetry and intensive care unit where she offers a comforting presence to patients and staff.
In her spare time, Sister Barbara enjoys reading and writing letters to family and friends. She says the past 50 years have gone by quickly, with each passing year instilling an even deeper appreciation for Mass and daily common prayer with the sisters.

Sister Janet is the oldest of the two girls and seven boys born to John and Ida Zander in Mandan, N.D. She was familiar with Benedictine sisters as a student at St. Joseph’s grade school and St. Mary’s Central High School, but she did not think religious life was her calling. She once attended a vocation event and recalls telling her mother, “It isn’t for me.”

Graduation from Mandan High School was followed by work in a farm credit office. Sister Janet recalls participating in her family’s Lenten practice of daily Mass that year. “It was during that Lent, in the power of the Eucharist, that I came to the realization that God might be calling me to be a Benedictine sister and it wouldn’t hurt to give Annunciation Priory (now Annunciation Monastery) a try!”

Sister Janet began her ministry in elementary education, teaching at Cathedral Grade School in Bismarck, St. Patrick’s school in Dickinson, and Christ the King in Mandan. She then assisted in the monastery business office and served as secretary to the prioress for 11 years. When Sister Joanne Graham was prioress, she recognized Sister Janet’s gifts for liturgy and asked her to pursue a degree in liturgy at Notre Dame.

After receiving her liturgy degree, Sister Janet became pastoral minister at Queen of Peace parish in Dickinson, N.D. She describes her seven years of ministry there as incredibly blessed. “It was an exciting time because the parish was starting to build a church. I loved the people and found them welcoming, open and receptive to new possibilities of being church.”

“It is energizing to be in the university setting,” says Sister Janet. She values the students, wonderful colleagues, opportunities to learn, grow and enjoy convocations, drama, music, athletic events and daily walks with friends.

“As the years have gone by, it’s interesting how my conviction has deepened in the realization that this is an extremely fulfilling way of life,” says Sister Janet. “Being supported in monastic community through inspiring role models, in seeking God together and getting to know oneself through community brings such a richness to life.”