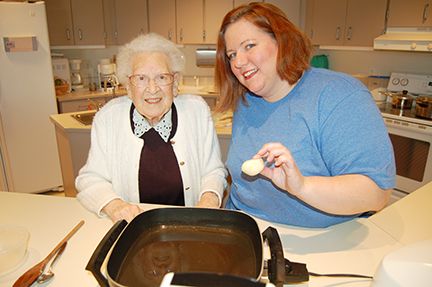 I find it rather fitting that Sr. Rose, a person I affectionately called my soul buddy, died on All Souls Day. How special is that? A professed, Benedictine Sister for 75 years, going home to God on a day of prayer, dedicated to the souls of the faithful departed, and faithful she was.

Eight days shy of her 101st birthday, Sr. Rose was what I would call a very present figure at Annunciation Monastery. Present in the routine events, only missing prayers or mass when she could no longer physically sit in a wheelchair. Present at special events like Monday night movies, popcorn nights, and parties. Present to the guests of the monastery. Rarely did a guest to our dining room not receive a special greeting from Sr. Rose. She made it a point to physically go to their tables and extend Benedictine hospitality to them- no small feat considering her mobility issues, and it was her Benedictine hospitality that endeared me to her.

When I started discerning my call to religious life, the first place I visited was Annunciation Monastery. I carefully studied the Monastery’s web and Facebook pages before my initial visit so I would have a feel for the sisters living here. On their Facebook page there was one particular sister who I was immediately drawn to. She didn’t have a profile on the Monastery’s page, so the only thing I knew about her was that her name was Sr. Rose. I told myself that I needed to get over my shyness and make an effort to visit with that lady. I did it, and the bond that Sr. Rose and I developed over the next two years was something that I hope everyone has a chance to experience with another human being at some point in their life.

I think Sr. Rose took the Abraham Lincoln quote, “Whatever you are, be a good one.” very seriously. She was a Benedictine Sister, so that meant prayer, and her ministry- which happened to be food service were of utmost importance to her.

She prayed a lot, sometimes saying the rosary three times a day. When she experienced hard times in life, she prayed about it. When someone she knew and loved experienced hard times in life, she prayed for them. She went to the bulletin board multiple times a day to see if there were any new prayer requests from hurting people she did not know so she could pray for them too. When I would seek her advice on things that were bothering me, she would inevitably tell me to go and pray about it. As soon as I would leave her room, she would pick up her rosary and pray for me. She prayed always.

In her ministry of food service, she was known for two things: baking birthday cakes for any person that was in the hospital on their birthday; and making bread. Her bread baking skills were legendary. She often told the story of Dr. Cleary bringing his children in to pick up loaves of her freshly made bread. She delighted in watching the Cleary children bicker over who got the heels!

For two years, I begged her to teach me how to bake bread. She kept putting it off, saying she would teach me when I moved to the monastery. I had been living at the monastery for over a year, before she relented. Finally, on August 5th, of this year, she taught me how to make bread. I’m not sure if it was out of pure exasperation from my incessant nagging, or if she knew that her time was running out. Either way, that day was one of my fondest memories of her. After each step, she asked me if I got it and if I was going to be able to do it by myself. For many years she carried around a copy of her bread recipe in the pocket of her walker. She tried to get me to take it that day, and on several other occasions because she was afraid someone would throw it away. I told her I didn’t want it until she went to God because she just might need it again. I kept my word to take it after she went to God, and on the day she died, I went to her walker and got the recipe. I had it laminated, grease stains and all.

Sr. Rose truly lived the life of a Religious. Her room was sparse and she had very little desire to accumulate anything. Personal presence was the best gift you could give her. She just liked being with people. I also discovered that she liked receiving letters in the mail. One day we happened to be checking our mailboxes at the same time and she was lamenting the fact that another day had gone by without receiving any mail. Seeing how disappointed she was by not receiving mail, I decided to start putting an occasional card in her mailbox. When I saw how happy the occasional card made her, I decided to make it a daily occurrence. I started it during Christmas last year, drawing her the “12 Days of Christmas”. As we were approaching day 12, she eagerly asked me what I was going to draw next. My French hens looked terrible, so I decided that maybe I should practice drawing chickens. She delighted in her daily chicken mail, checking her mailbox many times throughout the day, and if there wasn’t a chicken in there by the time I got home from work, she would simply say, “The chickens didn’t lay today…” or more precisely “the chehggins”.

In return for the “chehggin” drawings, she tried to teach me a little German here and there. There was a particular song that she desperately wanted to teach me. She had been trying for over a year to remember the words but they escaped her. She recalled the title being “Maria zu lieben” and vaguely remembered how it started, but that was it. Sr. Hannah and I scoured the internet, but we just could not find the right song. On Sunday evening, the day Sr. Rose died, I was helping Sr. Agatha pick out music for her wake and funeral. Sr. Rose had requested that one song about Mary, and one song about Joseph be included. I instinctively knew the Mary song needed to be “Maria zu lieben” but I thought there would be little hope of finding it. I think Sr. Rose interceded a little bit that evening. We went downstairs to look for some German hymnals and Sr. Agatha found two, little, black, German books on the shelf. She handed one to me and told me to look through it. It had no song index, so I blindly opened it up and turned a mere two pages before I found it! So here you go Sr. Rose….

Ironically, when I chose the song about Joseph, I didn’t look at the notes, I picked it because I liked the words. It turns out, that song is to the tune of “Maria zu lieben” as well. I think it’s safe to say Sr. Rose wanted “Maria zu lieben” as a part of this service.

Although she suffered immense pain and anguish over the last two months, she remained faithful to God, her father. In her most painful moments, you could repeatedly hear her praying to Jesus, Mary, and Joseph. When you would ask her if there was anything you could do for her, she would often say, “…just pray for me.” As her health continued to decline and her suffering became greater, she continually asked God to take her home. However, in the last two weeks of her life, she ceased asking God to let her die. The reading from Romans that we read said, “I consider that the sufferings of this present time are as nothing compared with the glory to be revealed for us.” I would like to think that Sr. Rose came to that conclusion and that is why she stopped asking God to let her die, that the immense suffering she was experiencing at the end of her life was a small price to pay for the glory of the kingdom she was about to enter. As God came to greet her and take her to heaven, I can almost hear her saying, “Father, into your hands I commit my spirit.”

Sr. Rose, I love you and will miss you more than you will ever know. May you never run out of flour and always have someone to draw you chickens.