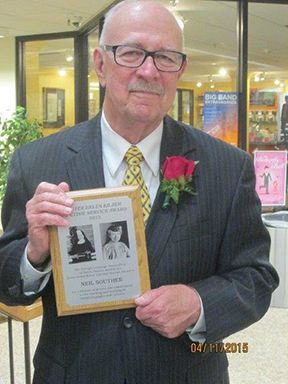 Neil taught in Bismarck for over 35 years, and, after retiring from the district, returned to the profession to teach Latin in Mandan for eight years until a replacement teacher could be found. He officially retired in 2013. During his career, he was instrumental in bringing the Junior Classical League to North Dakota, in the writing of the North Dakota foreign language standards, and in developing the introductory foreign language classes at the middle schools in Bismarck. He was, and continues to be, an inspiration to his students and fellow educators because of his passion for and dedication to learning languages.

Neil, even though retired from the teaching profession, tutors students in the Bismarck-Mandan area in French, Spanish and English. He is involved in the local French club, travels abroad, and continues to study languages and cultures of the world

*Information and photo provided by Valerie Kling, Susan Devine and FLAND (Foreign Language Association of North Dakota). Thank you for honoring Sister Helen Kilzer in such a meaningful way. It brings her, and all of the Benedictine Sisters of Annunciation Monastery, great joy!