Reflection for the 4th Sunday of Advent 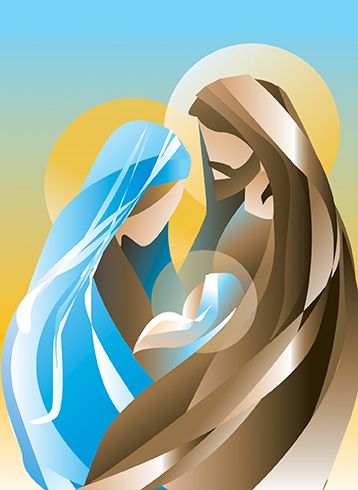 The Dreamers: A reflection for the 4th Sunday of Advent (Matthew 1: 18-24)
by Sister Hannah Vanorny

Sister Joan Dawber of the Sisters of Charity of Halifax, had a dream. The dream began back in 2001, when 600 women religious leaders met in Rome to discuss the growing problem of human trafficking.
As journalist Jo Piazza explains in her book, If Nuns Ruled the World, that meeting of women religious compelled Sr. Joan’s congregational leader to send out a letter asking her community of sisters to study the issue of human trafficking. Sr. Joan complied and began reading up on the issue. She noted: “When I read about it [human trafficking], I felt squeamish. It was a world I didn’t want to get to know,” a world so “wounded and violent and stripped of hope…I didn’t even want to look at it because it was too upsetting. I thought I would just pray about it…but of course, when we pray, it isn’t the other people who are changed, it is us who get changed, and as I prayed I got stronger. I knew there was a desire in me to assist. I can’t explain it any better than to just say that it became clear to me. I had a sense that I could make a difference.”

Sr. Joan had a dream – and she bravely acted on it, venturing out to learn more about human trafficking and to explore what needed to be done. Realizing that the women needed somewhere to live, she eventually, with the support of her community, started Lifeway Network in 2007, a nonprofit that provides housing for victims for up to a year. Sr. Joan also got a number of other convents to house women for shorter periods, creating an underground railroad of safe houses for women who have become virtual modern-day slaves.
The very first woman who came to Sr. Joan’s safe house started to cry when she saw her very own bed, a place where she could sleep without worrying that someone would abuse her during the night. “Oh my God, this is beautiful,” she said over and over again.

In today’s gospel, Joseph also had a dream. We can believe that Joseph was a good man, a man of prayer. Matthew calls him a “righteous man,” and tells us that Joseph was “unwilling to expose” Mary to shame when he found out that she was pregnant with a baby that was clearly not his. Before Joseph was visited by an angel in a dream, he probably spent a fair amount of time in prayer, asking God how his upcoming marriage had so thoroughly crumbled before him. He was probably struggling too with his decision to simply walk away from the situation – to divorce Mary quietly in order to save her from death by stoning.

When Joseph dreamt that an angel appeared to him and told him that Mary’s baby was not the result of adultery, but was actually a son who had been conceived through the Holy Spirit, he probably surprised even himself with his reaction. It must have been awfully shocking for him to hear the angel’s prophecy about his fiancée. The angel told him: “She [Mary] will bear a son and you are to name him Jesus, because he will save his people from their sins.” As commentator Reverend Linda Pepe has said, Joseph could have easily chalked the whole dream up to a hallucination caused by bad seafood. But Joseph did not do that. He trusted his dream, born out of prayer, and made the monumental decision to take Mary into his home as his wife.
Let’s look at Benedicta Riepp (the founder of American women monasticism) for a moment. Benedicta had a dream of Benedictine religious life spreading in the United States. She envisioned religious life as a large tree, covered all over with beautiful white blossoms, continuously growing out into new blossoms of unity and love. Benedicta believed that God had given her this dream, which is why she persisted in her efforts until her death, working tirelessly through many hardships. It is difficult to look at the Benedictine women of today – all of those strong, educated, and compassionate women – and not see that Benedicta’s dream was truly a gift from the Holy Spirit.

How do we know today if our dreams are really from God? The answer is discernment of course, meaning we need to listen carefully to our hearts and to the small voice inside of us that is God – that voice that speaks loudest while we are in a state of prayer. We all have dreams and we all have a choice: to declare the dream too hard and unrealistic and to walk away, or to bravely pursue that dream. If we pursue our dreams, we are declaring that we trust God enough to believe that He has a say in our deepest desires, in our dreams to make the world better in some way.

It does not matter if our dreams are big or small in scope, each dream is something that God is calling us to and we must act with trust and hope. Perhaps, for example, we dream of a kinder world. How can we act on that? The answer can be as simple as being kind to others and ourselves, even when it is hard. Perhaps there is a specific cause we feel drawn to, something that breaks our heart when we pray about it. In response to our prayer, we can figure out ways to follow our dream, that pull we feel from God. Our actions could be as simple as writing a letter or changing our own attitudes.

A big part of following God’s word in our lives and in our dreams is to overcome fear. We all know that some of the biggest and most influential dreams in the world would not have borne fruit if fear had held the dreamers back…if the dreamers had not trusted that the Holy Spirit was interwoven in their dreams, leading them towards a way to bring light to others. Religious Sisters especially must keep rising above fear, as we are called to help wherever there is a need. Sister Ruth Fox commented on this, writing about Benedicta: Her “life reminds us that there is no time or place or reason to surrender to paralyzing fear. It is not worthy of God or of our monastic calling to fritter our energy, attempting to make only a few insignificant sparks in this world. Rather, her life says, be fearless so that you might flare up in flames, to serve the kingdom of God.”

Sr. Joan had (and has) much to fear. Her safe house has to be kept secret with mailings and other supplies first arriving at an alternate location before being taken to the house. As Jo Piazza notes in her book, the majority of the traffickers (mostly men) are still out there and angry that their women slaves are being taken away. Plus, as all of us do, Sr. Joan must have feared failure when she first began following her dream. It is likely that whatever we dream will not turn out exactly how we envision it in our heads. God is ultimately in charge of our dreams and the paths they will take, not us. Yet we know and trust that God will not lead us down the wrong path as we act on our dreams and desires. We may even be quite surprised by what happens! Let’s come back to Joseph - little did he know when he went to bed that night that he would have such an amazing dream. He did not know that he would end up becoming the adoptive father of Jesus, the one who came to save humanity…the one destined and recorded in the book of Isaiah to become our Emmanuel, our God with us. All because Joseph followed his dream.