Memorial Reflection for the Wake Service for Sister Donna Johnson 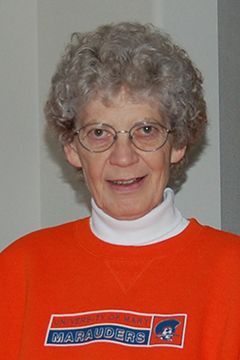 Sister Nicole, Sister Donna’s classmates, Sister JoAnn and Sister Thomas, and my Sisters of Annunciation Monastery, Cheryl, Maureen and Ben, Dianne, Wanda and Dewey, Kirby and Linda, and extended family, and friends all of Sister Donna,

When, back in 1980, each sister was invited to update her personal requests for funeral arrangements, Sister Donna simply penciled in, without any citation, “reading – do you love me Simon Peter. Feed my lambs. Feed my sheep.” All last week as we heard from the Gospel of John at Mass, Jesus proclaims that he is the bread of life – not the bread of survival or the bread of existence, but the bread of life. Gathered here to commend Sister Donna to God’s eternal life we do so for a woman who knew that, like the ordinariness of bread, that Jesus wants to be ordinary for us – but “ordinary” in a life of fullness and liveliness and love. And Sister Donna was a woman whose love showed in “feeding the sheep.” Often content with silence, she was not an extensive talker but a largehearted woman of deed. As one of our former members said, Sister Donna was a “perfect example of service.” She characterized her a “Jack in the Box,” sitting on a spring, ready to respond when and where needed whether in a healthcare emergency, in need for dishwashing or meal service assistance, as a ready companion to a Marauders game or a student’s music recital. In her approachability, one knew “Sister Donna was there for you” whether in quiet presence, ready help, or sustaining support. I knew that in a particular way when it was just Sister Donna and me at my mother’s bedside when she died in a Garrison care center. Thank you Dianne, Wanda and Dewey, and Sister Susan for being with Sister Donna when she died. And thank you, Sisters JoAnn and Gerard for vigiling through the night in her dying hours.

Last week, too, Jesus – in John’s Gospel – tells of not losing anything of what the Father gave Him but that He should raise it on the last day. First given by the Father to Chuck and Alma Johnson, this second daughter was given in turn to Christ and the Church in being baptized Donna Gail. In family circles she fondly came to be known as “Pete” after they dressed her up, in fun, as “Pete the Tramp” and the name stuck. Donna subsequently gave herself to God and the Church in first profession in 1961 as Sister Mary David in responding to her call to the Benedictine way of life here at Annunciation.

In the ways she lived life, Sister Donna conveyed a quiet recognition that “all is gift.” She knew that our lives abide in Christ and we find out how in scriptural accounts and in the stories handed from one generation to another. Christ’s question, “do you love me?” found Donna’s response in faithful “feeding” or nourishing her prayer, community, service, and play. And, as Jesus told Peter, when you are young you will go as you will but when you are old you will be carried where you have no wish to go. We know that took its course in Sister Donna’s life these last years in the need for memory care and living at Mapleview where she received compassionate support. For family and community, these years have been an extended goodbye.

Sister Donna loved all of her family, from one generation to the next, and we know how she missed her sister Kay after her death. Sometimes things she learned through family became a teaching. How surprised I was one day when, as a passenger and non-driver, Sister Donna informed me that, contrary to what I had just done, when making a left turn on a road with several lanes you merge from one lane to the next starting with the closest. It was a lesson that tripped up a nephew in a driving test and she wanted to make sure I knew what was correct!

What pride she took in having been a drum majorette and cheerleader in high school! She not only enjoyed marching but would spontaneously do so in any number of occasions! And she loved to dance! Sister Donna seemed to know that “dance is the landscape of the soul” touching something sacred as the “creator and creation merge into one wholeness of joy.” When invited to do liturgical dance she was eagerly ready. Those of us present some decades ago hold in festive and joyful memory how Sister Donna and Sister Susan Berger, dressed in long, flowing white dresses with red sashes, led the procession at Midnight Mass in Our Lady of the Annunciation Chapel as we sang “Good Christians Come Rejoice.” Sister Donna took Jesus at his word in coming that she might know the way in having life…and truth…and beauty.

We know what an ardent sports fan Sister Donna was and, coincidentally as we gather on behalf of her with each other here, the University of Mary Athletic Department is holding their recognition event of student athletes in this their “Night of Champions.” But here, too, we have the night of a champion – a champion who was a great teambuilder in love, hospitality, friendship and service, - on behalf of patients and nursing students and colleagues, - on behalf of family and with Sister JoAnn as double cousin, profession class member, and friend, - on behalf of community and caring for the sister with Sister Joseph – what a team they were! - and with Sister Mariah as nursing department colleague, and with Sister Gerard as community nurses. In the “game” of being a Benedictine Sister of Annunciation Monastery, and lovingly and faithfully “feeding the sheep” to prove her love for Christ, she who was given by the Father, is now invited into the fullness of light, love, and salvation. We bow before the mystery and, with Christ, give Sister Donna back to God who first gave her to us.