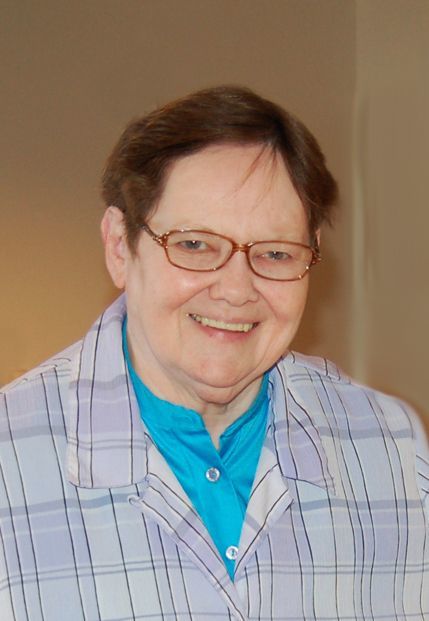 “I want to know Christ and the power of his resurrection and the sharing of his sufferings…”  These words from the beginning of tonight’s reading could very well be Sister Mary’s words.  Mary indeed knew Christ and shared his sufferings, especially during these past 11 years, and she now knows the power of his resurrection.  I hear Mary in the last lines of tonight’s reading too.  As one who was always concerned about everybody else, Mary leaves us with a bit of advice.  “Therefore, my brothers and sisters, whom I love and long for, my joy and crown, stand firm in the Lord in this way, my beloved.”

Where do we begin in talking about the life of Sister Mary, a faith-filled, talented, generous, compassionate woman who gave so much to so many people of all ages?  One of Mary’s former students described her as “a gentle soul of love, kindness, faith, humor and compassion.”  Another said she was “a gentle lady who always saw the good in people.” We all saw these qualities in Mary too, so let’s look at some examples.

A number of people I visited with spoke of Mary’s humor.  She was a great entertainer, so funny! When we were postulants, she and Thomas were taking French—I’m not sure why, but I remember how she would try to impress us with her French by putting on a tam and walking around quoting a line from her French textbook.  She was also great at imitations and storytelling.  She once told us about a formal dinner she had attended when she was governor of Girls State, and being new to this kind of formality, she drank from the finger bowl.  Yes, Mary was funny, but she had one weakness that I recall—she could never get the punch line of a joke.  Remember that?

Mary was a fine teacher, as we all know.  Her students loved her and learned so much about life, about accepting others, about being aware of what’s going on in our world—a number remembered being told to “pray the newspapers.”  She definitely kept up with newspapers and periodicals.  Sister “Mary Handout” was generous in sharing all the great sources she found.  Her students and all of us were grateful.  Sister Thomas would often look to Mary for sources to use for her many speeches.  Apparently, Mary sent her handouts to the Dopplers too.  Her brother-in-law, Dennis, said they were shipped by “Midwest Trucking.”  I could go on about Mary’s students’ remarks, but will end with her nephews’ praise of her teaching.  John said he received great instruction from her, including direction for his life’s work which he loves. In his message to her on her golden jubilee, Mark gave a whole list of wonderful qualities Mary had as a teacher—so many he could have written a book about her.  I liked his line about her being “tough but terrific in disturbing or inspiring us to action.” I might add that both Mark and John also appreciated the fact that Mary, knowing Tina and Tami, totally supported and encouraged her nephews in their choice of spouse.

As many have said, Mary was always kind and gracious.  She continued her friendliness and attention to everyone even when she was at St. Vincent’s.  We used to say she had a ministry there of visiting with the other residents.  They all loved her and appreciated the time she spent with them.  Mary and I used to have some pretty good visits until this last year when she didn’t always know us.  Even then she would be gracious and thank us for coming—it was amazing.

Mary was talented in music too.  She played and sang for weddings and other occasions.  I learned that she and Dennis sang together for weddings and often entertained the family with their musical skills.  We sisters especially appreciated her gift of playing by ear, as she would play piano for our group singing just for fun.  We would name a song, and she would play it.  My dad loved it when the sisters would come to our house for Christmas caroling.  He always said Mary had the most beautiful voice in the world.  Mary enjoyed hearing that.   She did have a beautiful soprano voice.  A couple years ago—maybe three—we talked her into singing, “O Holy Night” for St. Vincent’s Christmas party.  She did a fine job.

And Mary loved Country Western music.  I think Mark called her the “guardian angel of country music.”  She would be so thrilled when a country music singer came to the Bismarck civic center.  Somehow, she would get tickets and then look for someone to go with her.  I was chosen the time Eddie Rabbit was in town.  She promised me it would be soothing, reflective music.  Anyway, I went, and we sat up in the rafters and couldn’t get away when the concert began.  All I remember is that it was painfully loud.  I know Country Western music is not all like that.  I could maybe support her in her love of Johnny Cash, but Mary couldn’t get me to go to another concert or appreciate Country Music as much as she and S. Rosanne did.

Mary always stayed close to her family—she loved them all and welcomed and loved each addition to the Walker clan.  Her nephews and nieces loved her too—they wrote such beautiful messages to her at the time of her 50th jubilee which she celebrated at St. Vincent’s.  It sounds like she spent time with them when they were small and supported them in anything they chose to do as they grew up.  I especially enjoyed how the Dopplers talked about the fun they had visiting Mary at the Priory and at Mary College, which they thought was named after her. I was interested, too, in Matt who climbed mountains with Mary—in Dickinson—and learned to enjoy jellybeans as much as Mary did.  I remember well her love of jellybeans.

Like everyone else in her family, Mary was a good writer—except for her actual penmanship which was next to impossible to read.  Remember how she typed notes and letters as a kindness to her readers—though she usually had quite a few side notes or corrections which didn’t always clarify the point.  She wasted no space on the paper.   Anyway, Mary enjoyed creative writing—both poetry and prose. She wrote a number of plays when she taught at Priory High and also wrote the script for some of our Benedictine Awareness programs. She attended several writing workshops and had some of her work published.  My favorite was “Of Hollyhocks” which was published in Sisters Today.   The family may be familiar with it.  She wrote it to Billy Jack after learning of his death.  The part I always remembered was where Mary told about attending her sister’s First Holy Communion and was amazed when Billy Jack, a fifth grader at the time, after hearing the choir sing, “Jesus, Jesus come to me, All my longing is for Thee; Of the friends the best Thou art, Make of me Thy counterpart,” asked her, “What is a counterpart?”  I guess it stayed with me because I was familiar with that song from my youth and I had never thought about the meaning of counterpart. Mary ended her “letter” to her brother by saying, “Billy Jack, I am confident that Lazarus, friend of all God’s poor—men, women, and children—opened wide the mansion gates for you and that you now rest forever in a home with perpetual light and eternal peace.” Now, the gates are opened for you, too, Mary.  You and all your loved ones can “sing and joyful be, and through eternity…sing on.”

We will miss you, Mary, and we pray with St. Benedict, “May Christ bring us all together to life everlasting.”