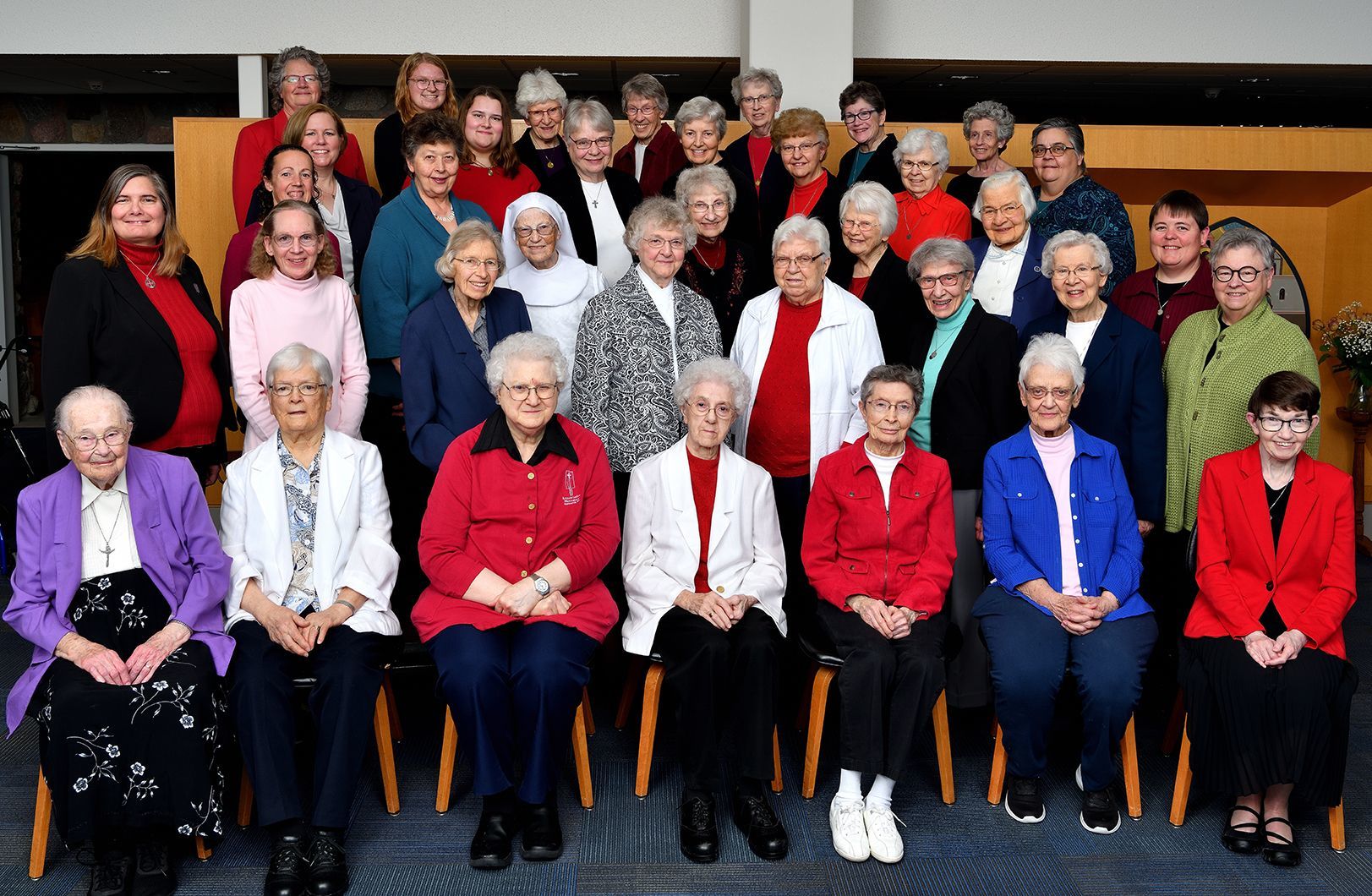 The Benedictine Sisters of Annunciation Monastery, Bismarck, approach a significant anniversary. Seventy-five years ago, the long-awaited news for the Sisters came on March 24, 1947. A telephone call from Bishop Ryan announced Rome had granted the request for the sisters to become an independent community. Since the call was received on the eve of the Feast of the Annunciation, the new independent community would be called Benedictine Sisters of the Annunciation. Mother Decora Kaliher was named the first prioress. Now, in 2022, Annunciation Monastery’s prioress is Sister Nicole Kunze. The Sisters are still serving needs in the community of Bismarck/Mandan and beyond.

A Little History Prior to 1947

Benedictine Sisters had been serving in Dakota Territory since 1878, when they were summoned to teach the children of German immigrants. This endeavor was met with trust that God would assist them in beginning a ministry of teaching which ultimately led to Catholic schools throughout central and western North Dakota over the next decades.

In response to the needs in healthcare, in 1885, and at the request of Abbot Alexius Edelbrock , Benedictine sisters started the first hospital between Seattle and St. Paul – St. Alexius Hospital, which was first located in the old Lamborn Hotel on Main Street. The Sisters were the first Benedictine women in the U.S. to serve in health care. Stories from the past about sisters who carried fully anesthetized patients up and down stairs for surgery and recovery are still told. As Sisters perceived the needs, they opened other hospitals and care centers while continuing to teach, both in schools and in Catholic parishes in the Bismarck Diocese. At St. Alexius Hospital, Sisters started programs in anesthesia, physical therapy, radiology, and pharmacy. Sister Boniface Timmins was the first administrator at St. Alexius Hospital, now CHI St. Alexius Health.

In 1944, Bishop Vincent Ryan envisioned Benedictine Sisters beginning a new independent community in Bismarck. He approached the prioress of St. Benedict’s Monastery in St. Joseph, Minn., to ask for sisters to volunteer to move to Bismarck to found a new community that could serve the spiritual needs of the area. A group of 140 Benedictine Sisters came to establish their community at the location of 305 Avenue A West (also known as the C.B. Little House). The home was owned by the Bismarck Diocese and offered a temporary residence for the sisters.

“Though this was considered a mansion for a family of five (family of Mr. C.B. Little), it was really inadequate for the needs of 140 women. That meant simply that the Sisters would live close to their schools or hospital, or whatever was their place of work. However, 39 Sisters did take up residence there. How was it possible? When I tell you what had been a three-car garage was turned into sleeping quarters for 17 nuns, plus a music conservatory, you’ll know it was indeed possible. In the dining room we sat so close together that I was never quite sure whose napkin I was using.” (the late Sister Helen Kilzer)

Ministries in education and healthcare expanded greatly in the 50s and 60s. With the same faith, courage, and trust in God as they had for starting each ministry, the Sisters enlisted renowned Austrian architect, Marcel Breuer, to design their new home. The site was initially planned to be near the Green River, approximately 12 miles east of Dickinson, N.D. Plans changed when Charles “Chick” and Eunice Swenson made an offer that was too generous to ignore. They gifted the sisters with 40 acres of land south of Bismarck. In 1959, the Sisters moved to their new priory, founded Mary College, and opened Priory High School for Girls.

The Sisters’ sponsored ministries: St. Alexius Medical Center/Garrison Memorial Hospital, and the University of Mary, experienced tremendous growth over the decades. The name Annunciation Priory was changed to Annunciation Monastery in 1998 after deliberate conversations and study about the meaning and tradition of monasticism.

The Sisters moved from their location at the University of Mary to a new monastery in the year 2000. Since this time, a new sponsored ministry has emerged. Ministry on the Margins was founded by Sister Kathleen Atkinson in 2013.  This ministry serves the needs of those who fall through the cracks in the system and live on the margins. It offers a food pantry, overnight coffee house, warm clothing, health screenings, and assists with the spiritual needs of those who come for help. Staff members help people who are leaving the prison system with re-entry into society and match them with resources to promote stability and successful transition. Through countless volunteers and service agencies, Ministry on the Margins has an enormous impact in the community.

What the Future Holds

The Sisters continue to serve in schools, parishes, and hospitals. An oblate program offered at Annunciation Monastery gives people of varying backgrounds an opportunity to live according to the Rule of St. Benedict, as their own state of life permits. Through meetings, study, prayer, and sharing with the sisters and other oblates, their lives are enriched by their deepening relationship with Christ.

As always, guests are welcomed to Annunciation Monastery for retreats, prayer, and spiritual direction. The Sisters have strong bonds with those serving at our sponsored ministries: CHI St. Alexius Health, the University of Mary, and Ministry on the Margins. Retreats for women considering religious life are held throughout the year at the monastery. God still calls women to this way of life, and the Sisters are here to help in their discernment. In addition to daily Mass, the Sisters gather three times a day to celebrate the Liturgy of the Hours (the prayer of the church) and spend time in private prayer and lectio (reflection on Scripture).

To commemorate 75 years as an independent monastic community, the Sisters will feature historical displays throughout the year at the University of Mary, CHI St. Alexius Health, and Ministry on the Margins. Smaller celebrations will be held throughout the year. The Sisters host an annual “Sponsorship Formation Event” that brings leaders together from the aforementioned sponsored ministries in a day of learning and sharing about the Benedictine values and how those values are lived out at each institution.

Sister Nicole Kunze, prioress of Annunciation Monastery, states, “We look forward to the next 75 years of faithfulness to prayer, community, and service, in the way of St. Benedict, in which we treat all as Christ. We respond to the needs of the times in collaboration with others. God has blessed us. God still blesses us.”