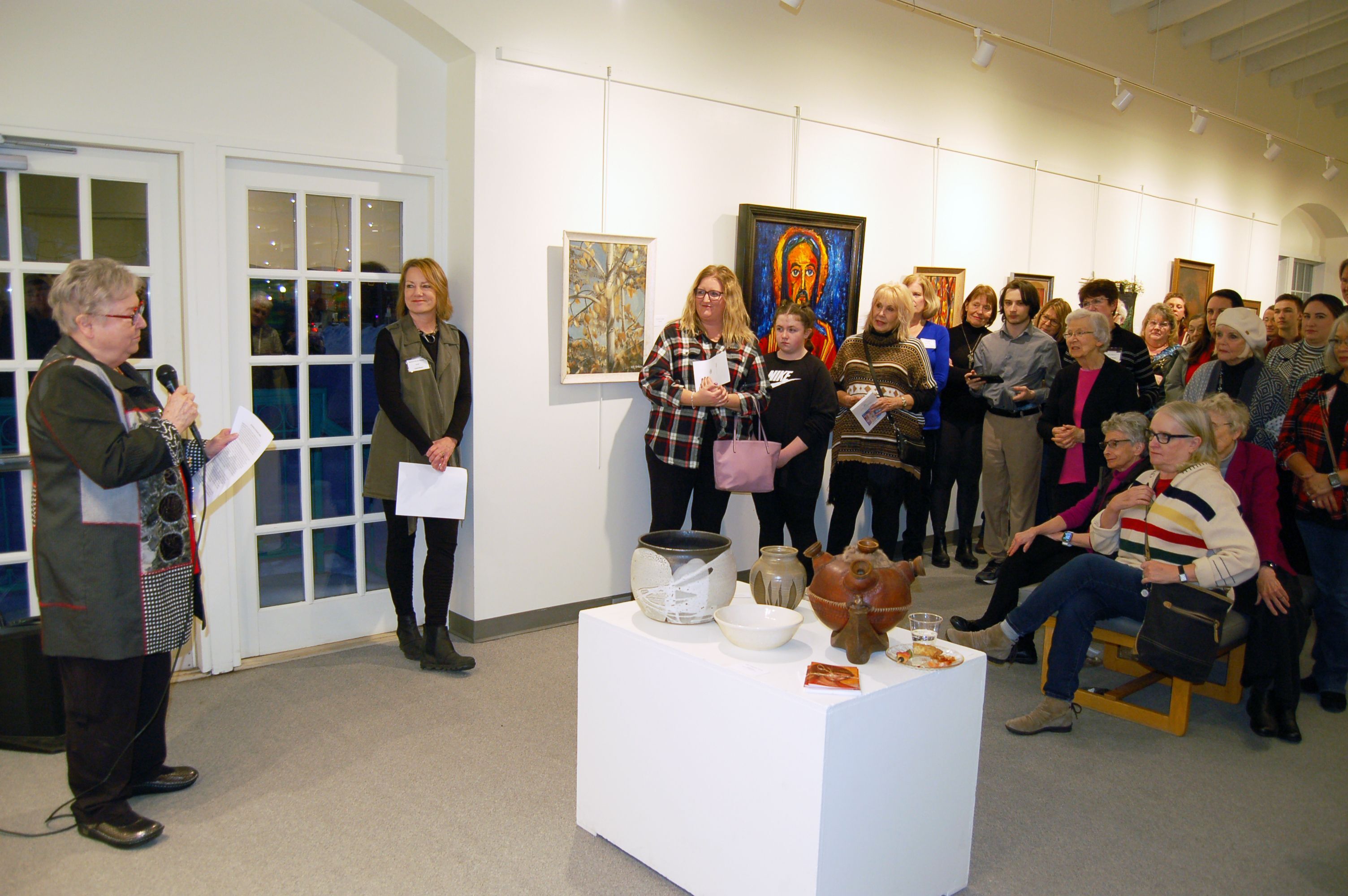 Art & Music in the Monastic Tradition

Thank you all for coming as we close the celebration of our 75th year as an independent monastery with this art exhibit.  With us is our prioress, Sr. Nicole Kunze and a number of our sisters. And, thank you BAGA for this great opportunity to display the art and music from our local monastic community here at Annunciation Monastery.  We have opened our archives to share with the larger community the visual art our sisters have created over the years.  We have selected some art, though this is not all the art we house at Annunciation Monastery, but hopefully some of the best art created by the sisters.

Monasteries have been fertile hotspots for literature, music and visual art, often functioning as a hub for the nurture and preservation of creative arts down through the ages.  Monasteries were powerhouses for innovation in the arts from the 6th through the 12th centuries, as most of the books of the Western world were produced by monasteries.  Skilled scribes copied and illuminated texts with intricate original artwork.  These mixed media works were not simply decorative but were intended to draw the viewer into a sustained contemplation of the layered meanings within the creative works.  To create an environment for devotion, monastic communities also fostered relationships with other visual artists who could beautify their spaces.  Some of these artists were monks and nuns, but not all.  Famous works such as da Vinci’s Last Supper for instance were originally commissioned for monastic settings.

To enhance the liturgy and periods of prayers that characterized the common religious life, monastic musicians created striking choral arrangements and plainchant (also called Gregorian Chant) for scripture readings. In order to keep everyone on the same note, medieval monks invented the system of musical notation based on spoken syllables (do re mi) that is still used today. Our musicians sharing their gifts and hard work with you tonight are Sister Agatha Muggli on piano and two of our Benedictine Oblates: Daniel Barr also on piano and Barbara Steiner on harp and yours truly on zither.

To this day, all monasteries pay great attention to an aesthetic sense that honors beauty, balance and harmony as attributes of God.  For untold years, music and art have been a means of focusing the mind and body, facilitating meditation and prayer across time, language and culture.

I would like to share with you little human interest vignettes of sisters past or present whose art is on display here, among them two of our founding sisters: Sister Mary Leo Bleth who grew up in North Dakota and Sister Mariette Sickler who was born in Austria Hungary.

Sr. Mariette’s first two loves were prayer and nature as she took great pride in her garden.  Art was her third love and she was a gifted artist making cards from pressed petals, painting landscapes in oil and crafting wood carvings.

Sister Mary Leo Bleth was Director of Nursing at St. Alexis Hospital and a Public Health nurse in the Dickinson area.  Her hobbies of crocheting and tatting were her way of letting go of the concerns of the day.

Sister Mary Ann Welder was a wife, mother, grandmother, and great-grandmother.  She was married 16 years, was a widow for 16 years and then a sister for 40 years.  She did oil painting, made Red Riding Hood Dolls, and was a most creative baker – FROM SCRATCH – as she often reminded us.

Sister Michael Kaliher, a gifted artist, potter, and poet was the only sister we ever had who seriously studied art.  She obtained a Masters Degree in art from Notre Dame.  She was a deeply spiritual and sensitive woman who had a love for beauty.  Sister Michael spent a year in India where she fashioned a fly wheel from a bicycle wheel and taught women how to use it to create pottery so they could sustain themselves.  Sister Michael once wrote:

“We are vessels of clay, made of fragile material.

It is our inner being that is of the essence.

We are drawn up and out of our self-centeredness.

We are emptied and opened to the awareness of our life worth.”

Sister Susan Berger was our prioress for 12 years and I remember her as a good and gentle listener.  She came from a family of artists and had a gift for putting things in focus.  She did creative photography and I remember her playfulness as shown in her gumball machine that is displayed here.

Sister Edith Selzler was a woman of words, wisdom, and wonder.  She wrote beautiful poetry and was a wealth of information shared out of her brilliant mind.  One sister remarked that between Sister Edith and Abbot Daniel Maloney, our then chaplain, we had the whole encyclopedia.  Rooted in common life, Sister Edith created liturgical clip art for Sunday bulletins and crafted beautiful Paschal candles.  She lettered stones with the name of each sister and did knitting and crocheting as well as card making.

Sister Hildegarde Urlacher loved gardening, but she created a lot of pottery from classes she took in Kansas and at BSC here in Bismarck.  She made dip and drape figurines, puppets, and wooden plaques of quotations with her jigsaw skills.  She made and decorated wedding cakes for family and friends over the years.  She is still the best baker in the monastery and her pies are the coveted fare for special birthdays or celebrations.  Don’t miss her dollhouse – another of her creative ventures.

Sister Rosemary DeGracia is willing to try new things from watercolor to quilting techniques.  She is a perfectionist in what she does and an artist at heart.  She is very giving of her time and willingly does needed alterations for the sisters which is very generous. I have read that asking an artist to hem a pair of pants is like asking Michaelangelo to paint your barn.

And then there is me.  I dub almost everything I do as an experiment.  If you can paint on paper, then why not cloth, if you can paint on cloth, then why not try to quilt it. The piece created for this gallery at this point time is a foundation pieced quilt of one of my heroes, a young woman who changed the course of history. Joan of Arc became special to me when I stood in Rouen France at the very place in Market Square where she was burned at the stake.  As I gazed at the spires of the cathedral there which began being built in 1030, I knew Joan had gazed at those same spires when she was being burned to her death in 1431.  That realization endeared me to her. So - when I found the pattern for this quilt, I took an online class to learn how to make it happen with a new skill of paper piecing.  Tonight is the unveiling of “JOAN”.  It is a compilation of 1435 small pieces of fabric sewn together.  May Joan inspire others with her strength and courage to follow the call from above, a call each of us must listen for and pursue in our own lives.